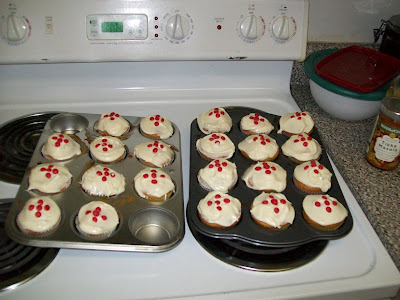 Look what I baked for Shakespeare's birthday! Aren't they pretty?

What I love find intriguing about this play: I find this a tough play to love, exactly – it’s got a heroine who’s as clever and determined and independent as any of the girls in the earlier comedies, but all of her brains and courage are invested in the single-minded pursuit of a man who is Very Bad News. And Bertram’s reformation in the end just doesn’t work for me (and I’m a pretty easy sell – I’m willing to accept Claudio and Angelo as changed men, but they both have big, shaken-to-the-core moments that can plausibly lead to realization and repentance. Bertram, on the other hand, tries to lie, slander, and weasel his way out of trouble all through the last scene.) I dunno. In lots of ways, Measure is a much more cynical play, but it also has a powerful message about grace and mercy and the potential for redemption; with All’s Well, the most we get is the king’s equivocal conclusion, “All yet seems well.”

That said, there are some really masterful touches in this play, starting with the language. Like a lot of late-ish Shakespeare, it’s written in a strange idiom, elliptical and riddling and hard to parse, but incredibly expressive. Take, for example, this exchange:

Helena: ... Now shall he –
I know not what he shall. God send him well.
The court’s a learning place, and he is one –
Parolles: What one, i’ faith?
Helena: That I wish well. ‘Tis pity.
Parolles: What’s pity?
Helena: That wishing well had not a body in’t
Which might be felt, that we, the poorer born,
Whose baser stars do shut us up in wishes,
Might with effects of them follow our friends
And show what we alone must think, which never
Returns us thanks.

No wonder poor Parolles is confused; Helena practically never spits out a whole sentence, and the syntax of that last speech is beyond convoluted – but with a sudden flash of clarity and eloquence: “we, the poorer born / Whose baser stars do shut us up in wishes.” (Also, of course, Helena doesn’t directly confide her love for Bertram; she speaks in riddles, almost from the beginning to the end of the play.)

And perhaps, after all, she’s under no illusions about her prospects for happiness with him; the most she says of her hopes for the future is “the time will bring on summer, / When briers shall have leaves as well as thorns, / And be as sweet as sharp.”

I saw a fantastic production a few years ago that made me rethink much of the play, but it was particularly masterful with Bertram's reformation. The actor portrayed him as so truly astonished by Helena's appearance and achievement of everything in his letter that he submits through a mixture of wonder and (mostly willing) capitulation. It's as if he half suspects Helena might have MAGICAL POWERS, and he both thinks it's in his best interests to submit--and is really so awestruck that he's eager to do it.

After seeing that production, his response, "If she. . . can make me know this clearly/I'll love her dearly, ever, ever dearly," has seemed both fervent and really rather affecting to me.

Kind of amazing what a difference a good production can make, isn't it? I've had much the same experience with Measure -- I saw a college production a few years ago that really made me believe in Angelo and Mariana, and I think that's shaped everything about how I read the play.

I liked the version of All's Well that I saw in London last summer, but they were going for a very young, immature Bertram and an ambiguous, where-the-hell-do-we-go-from-here ending, which is a bit less compelling.