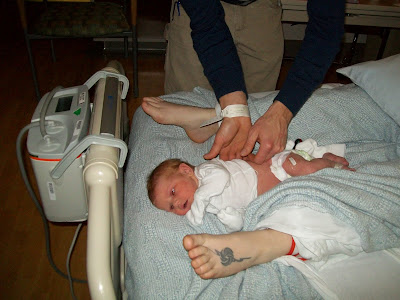 Welcome to the world, little guy.
Posted by Fretful Porpentine at 7:58 PM 12 comments:

I'm off to visit BrotherPorpentine in the predawn hours tomorrow (and, I hope, eventually to meet my nephew -- who had better hurry up and get born before I have to go back to Deep South State). More updates to come, maybe, whenever I have Internet access and news.

Happy holidays to everyone!

Me: Ahem. What do you mean, "that generation"?

Mom: Well, the whole blogging generation. You don't blog, so of course I don't mean you.

apparently, someone has bigger issues with course evals than I do

UC Davis acting instructor spends four days in jail for making an ill-advised joke about course evaluations. I'm not sure whether to laugh or cringe.
Posted by Fretful Porpentine at 8:56 AM 2 comments:

Labels: news of the weird

Huh. That was not so bad, except for the parts that were

OK, so they came and I looked. I seem to have escaped the falling sword, at least this time around; most of the evals were fine and the ones from the Shakespeare course, which I was the one I was most worried about, were positively glowing.

Curiously, the lowest ratings came from the 11 a.m. section of Brit Lit II -- the class that I had personally enjoyed the most and thought went the most smoothly. Three or four students said they thought I was pitching the class toward the English majors too much and ignoring the non-majors. (Hmm, maybe that's because the English majors are the ones who talk and ask questions and seem engaged? You think?) Anyway, I'm not sure what to do with this, especially since the 8 a.m. students -- almost all non-majors -- seemed to have no such complaints.

As per usual, there were a handful of comments about how I was too nervous and fidgety and moved around the room too much and it was distracting. One student expressed the opinion that I might have a disability. Harrumph. Another one -- referring to me by last name only -- wrote something along the lines of "Porpentine does not know how to relate to her students. She kept telling us about things* that she said were only studied on the graduate level. WE DO NOT CARE." Somehow, I don't think my chair will take this as the damning indictment it was evidently intended to be. And there were the usual demands for PowerPoint, and complaints that I asked open-ended questions and wouldn't just tell them the answers, none of which really bothers me.

More worrisome, I think, is the fact that the one question on which I seem to be getting consistently low ratings is "This instructor conducted class in a way that stimulated interest." After three semesters, it's clear that this is a pattern and not a fluke, but I'm not sure what I can do about it, short of getting a personality transplant. I mean, I do show images and video clips, and they say they like that; they say I'm enthusiastic and they like that; and nobody has given me any concrete suggestions about how to be less boring, other than not telling them about stuff they DO NOT CARE about. Blah.

Oh well. I don't think I'm going to get fired for being boring, so it's all good.

* Incidentally, I have absolutely no idea what these "things" might be. I do remember saying something like "Nobody reads the Parson's Tale except grad students because it's a really long sermon on the Seven Deadly Sins," but we did read the Parson's Prologue, so it's not like it wasn't relevant. Other than that, I haven't a clue. Honestly, I think this is the real reason why course evals bother me as a general concept; so many of the comments bear no obvious relationship to anything I remember saying or doing, so it's hard to know what to make of them.

ETA: Please note that I'm dwelling on a handful of negative comments because they tend to loom large in my own head -- this was an overwhelmingly positive set of evals, and I'm not sure they can be improved all that much while still holding students to reasonable standards of college-level work. I thought of deleting this post when I read it over this morning and realized how negative it sounded, but I don't like to delete posts.
Posted by Fretful Porpentine at 2:58 PM 15 comments:

Is there anything more agonizing than waiting for the e-mail with your course evaluation results? (Besides, I guess, waiting to find out whether you have cancer or something.)

Damocles, I feel for you...
Posted by Fretful Porpentine at 2:44 PM 4 comments:

Courseblogging: The end / the beginning

OK, that last post was rather boring and whiny. I'm in a happier mood now, as the exams are over and I don't have to start grading them until the weekend. I baked cookies for my 11 a.m. section of Brit Lit, by way of thanking them for being the sort of class that made me happy about going to work on Monday mornings. I wish I were going to see more of them next semester; right now, I have one enrolled in the Shakespeare class and one in Brit Lit II, while the 8 a.m. students, most of whom didn't show any obvious signs of liking my class, are signing up in droves. Go figure.

We finished off the semester with Gray's "Elegy Written in a Country Churchyard," which was a new text for me. It taught pretty well, I thought (much better than I was expecting -- it's one of those poems where you wake up at 5 a.m. thinking "GOOD GOD, WHAT POSSESSED ME TO TEACH THIS?" after which almost anything is a pleasant surprise). And I passed around a handout with "She Dwelt Among the Untrodden Ways," and we talked a bit about the common threads and differences, and why the Brit Lit survey sequence splits where it does. (Well, mostly it splits where it does because the Norton Anthology splits where it does. Which came first, the survey course or the Norton? I haven't the foggiest.) Anyway, teaching the whole sequence is odd because you get a bunch of repeat students, for whom this is like the second half of the same course, and a bunch of new ones, many of whom haven't taken the first survey. I don't know whether to think of it as a continuation or a change.

I spent most of the exam period working on the syllabus for next semester. I'm trying something new, loosely inspired by Dr. Virago's Crux Busters and Sisyphus's Close Reading Homework: replacing the first long paper with a series of five mini-papers, which will require students to focus very tightly on a small part of the text. I have a feeling grading these will be a huge time sink, and I wouldn't even attempt it if I were teaching two sections instead of one, but I'm hoping it will get them in the habit of thinking hard about word choice and the like.
Posted by Fretful Porpentine at 12:59 PM 2 comments:

-- Fondue and weird asparagus-wrapped-in-ham thingies from the faculty Christmas party count as dinner, yes? Particularly when washed down with large quantities of free wine.

-- As of this morning, I have met with my third plagiarist in three weeks. The first one groveled, told a long story about how she was in a car accident and had two pins in her shoulder and didn't remember things too well, and asked "Is there no understanding?" in plaintive tones; the second one said very little; the third said "Okay!" in an oddly cheerful tone and walked off. I liked the second one best.

-- The final presentations for advanced comp were ... interesting, particularly the one where I ended up having to explain my views on euthanasia to a bunch of highly religious Deep South State students, and the one that ended with half the class arguing over the death penalty. I'm not sure that was how the final was supposed to go, but on the other hand, it's a rare experience to have comp students who show this much passion, and I rather enjoyed it.

-- Is the semester over yet? Sweet Jesus, I want it to be over, except I really don't want to have to read the evals, particularly from the Shakespeare course. Ugh.
Posted by Fretful Porpentine at 6:24 PM 1 comment: