Next semester is four and a half months away. That's, like, an eternity.

So why am I checking Banner four or five times a day to see who is signing up for my classes?
Posted by Fretful Porpentine at 6:59 PM No comments:

We have been reading Walter Map and Christine de Pizan in the medieval lit class (we're sort of in debate mode, and will be for the rest of the semester). The students are having some problems with medieval argumentation, which is quite understandable. I mean, big massive heaps o' examples from classical mythology, relatively recent history, and the Bible all lumped together tend not to do all that much for us nowadays. And Christine, bless her, tends to make matters worse when she makes Lady Reason say things like "Well, there's this rhetorical figure called antiphrasis, in which people say the opposite of what they mean, so whenever you come across a book that dispraises women, you may as well assume that the author is actually praising them, regardless of what his real intentions were." (This inspired me to go off on this weird tangent about what it means when a text destabilizes the whole idea of written authority, presumably including its own authority, which I'm not sure the students really understood. Which is also understandable, because I sure as heck didn't understand it myself.)

But anyway, I felt obliged to point out that what constitutes a good argument is culturally determined, and it's therefore probably not all that productive to go around calling twelfth- or fifteenth-century authors illogical. Just, you know, differently logical. The students laughed at this, because of course it sounds like the most ridiculous of politically-correct euphemisms, although I didn't mean it that way. And then, because I never know when to shut up, I ended class by saying something like, "Whoa, get a load of that story about the cross-dressed monk. What did you make of that?"

One of the students said that there's not very much you can do with stories about cross-dressed monks, except laugh at them and move on. Which was pretty much what we did, since there were only five minutes left in the class period anyway.

Anyway, I think this is one of the biggest things I've been strugging with this semester: there's so much about this body of literature that is, to modern readers, Just Plain Weird. I'm uncertain what to do with the weirdness myself, and I'm never sure whether the laughter it often invites is appropriate, or whether it's exoticizing or dismissive or otherwise nonproductive. Yvain's lion trying to commit suicide? OK, funny. Margery Kempe inviting herself into the Crucifixion and telling Mary she'll feel better if she has a nice hot drink? I'm honestly not sure (although I think Kempe had a more robust sense of humor than she's usually credited with, and there are definitely things in the text we ARE meant to laugh at. "Her wot we wel that sche hath a devyl wythinne hir, for sche spekyth of the gospel" is a line that would not be out of place in Dr. Strangelove, and I believe she knew it.)

I'm looking forward to a month of Chaucer, because I feel like I'm on firmer ground with Chaucer (at least, I feel pretty confident I know which parts are supposed to be funny or ironic). Although, come to think of it, we'll be reading the Clerk's Tale and the Second Nun's Tale and all kinds of things which I don't normally teach, and which are filled with Weirdness, so who knows how it will turn out.
Posted by Fretful Porpentine at 7:35 PM 9 comments:

Spring has come to Deep South Town. The Bradford pear tree outside my office window was white with blossoms a week ago; now the green, glossy leaves are unfolding, and the rest of the campus is coming out in many colors. Surprisingly, students here don't seem to spend much time outside, unless they are walking to and from classes. I would have expected to see suntan-oiled girls on blankets and games of Ultimate Frisbee by now, but the lawns are very decorous and very still.

Perhaps they're too exhausted to play. I'm feeling that way myself. The nine weeks between the beginning of the semester and spring break (which starts TOMORROW!) seem very, very long. Spring means a faster tempo for both professors and students, a flurry of deadlines, more urgency in everything. And most of our students have little enough leisure time as it is.

Still, I hope they find a little time to enjoy the sunshine and the daffodils before they're gone.
Posted by Fretful Porpentine at 2:55 PM No comments:

Tagged for this by Undine. If you want to be tagged, consider yourself tagged, as I'm not sure I actually know twenty-five people who haven't done it already.

I have adopted Horace's idea of dividing the list into stages of life, and Undine's caveat that not all of these are current favorites. I'm not, for example, totally sure what was up with the Antonia White obsession, but an obsession it definitely was.

Grad school, and after

Hmm, this appears to be a somewhat eclectic list. I'm not sure what to make of it.
Posted by Fretful Porpentine at 7:38 PM 3 comments:

My whiteboard art for the Morte Darthur, inspired by Bardiac's recent posts along the same lines. The students seemed amused. 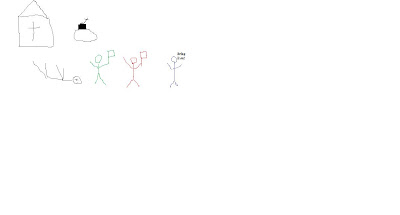