When the place where you were a VAP seven years ago and didn't get hired for a tenure-track job hits you up for donations, the experience is not unlike having your ex-who-married-someone-else hit you up for casual sex ...

... except, having had both of these experiences, I'm pretty sure I prefer the second one. Stay classy, fundraising department.
Posted by Fretful Porpentine at 1:28 PM 6 comments:

So I went to a reunion at the Beloved Alma Mater a couple of weeks ago. While timed to coincide with Homecoming, it was not by any means an official event; it was a reunion of staff and regulars (the line between the two is decidedly blurred) at the student-run coffeehouse where I used to work. And by "work" I mean "volunteer"; it was a strictly nonprofit coffeehouse, located in a building owned by the college and staffed by students who signed up for two-hour shifts in exchange for free coffee and the very occasional tip. We made enough money selling coffee and cookies to buy more coffee and cookies, and to pay for utilities and the occasional repair to the building. We had events that didn't cost anything to put on: open mike poetry readings, and swing-dance night, and music by pretty much anyone willing to perform for free, and Shisha Night.*

In its current incarnation, the coffeehouse is rather different. Among other things, they don't actually serve coffee any more. They do have regular live music -- by performers who actually get paid, although it's still mostly a "suggested donations" sort of affair rather than one with a formal cover charge. The aesthetic has changed a bit, more hard-edged punk than gentle hippie. Nobody smokes clove cigarettes any more, because they are illegal.

Some things have not changed. The current students passed around a bottle of Boone's Farm Strawberry Hill on the lawn while the band did their stuff inside, and it was as vile as I remembered. (Did I mention that the reason why the college was willing to sponsor a student-run coffeehouse in the first place was that it got pitched as an Alcohol-Free Activity?) Every semester, a new, blank notebook appears -- the "coffeehouse book" -- to be filled with poetry, sketches, cryptic notes, and whatever else people feel like writing in it. There is still a swing on the front porch, repaired whenever it breaks by a townie guy named Ned. I did not remember Ned's name, but his face was familiar. He would have been in his mid-twenties when we were undergraduates, which makes him around forty-five now. Still hanging around the coffeehouse. Someone asked him, at the reunion, what drew him to the place, what made him want to hang out around undergrads. He said he'd gone to Johns Hopkins and had a very buttoned-down college experience, and he liked being around so much art and creativity.

And somehow, my generation of coffeehouse people has become history. Most of the notebooks from when we were there are in the library archives; only one remained in the coffeehouse. (Considering some of the things I wrote when I was twenty, this is probably just as well.) One of the current students interviewed a bunch of us '90s students for an oral history / documentary project. We were a little bemused. We remembered all kinds of things, together, that we'd forgotten separately. One woman (the one of us who became a corporate lawyer, who was exactly the one you'd expect to become a corporate lawyer if you had known us all when we were students) said that she was amazed that the school had just given us this building, theoretically the property of the state of Virginia, to do with as we liked -- repaint, fill a back room with pillows and nickname it the Opium Den, let someone draw caricatures of the entire staff on the wall. And that we got (a tiny amount of) taxpayer money, via the office of student organizations, to underwrite activities that included smoking shisha, grits-wrestling, the usual undergrad quota of drunken hookups, and a certain measure of creative anarchy.

But I still believe (in my idealistic, very non-corporate-lawyer, academic soul) that they were right to give us our space, that every college probably needs a creative space of this sort. And that every group of students ought to have a Ned, a grown-up of their own who knows how to fix the porch swing.

* Smoking flavored tobacco. Any other substances that may have been smoked on such occasions were, shall we say, not officially part of the event. It is still sort of astonishing, in retrospect, that we were allowed to have official events that revolved around smoking. 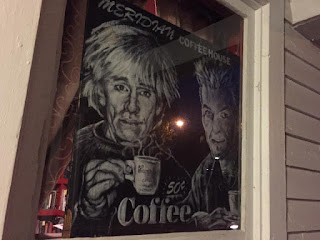 Posted by Fretful Porpentine at 3:16 PM No comments: