So, after I finished my tenure portfolio and before the massive stacks of papers started to come in, I took off for the big city to see Timon of Athens. (There are also baby pandas there, which were ADORABLE, but this is not really a blog about pandas, so I shall restrain myself.) Anyway, when I heard there was going to be a production in a vaguely-nearby city, I figured I should go because it was one of the five plays I needed to see to complete the canon; but then I went to see the same company do Troilus and Cressida, which actually made me excited about Timon. The production of Troilus was fantastic, and they're similar plays, I think, darkly funny and cynical in similar ways, and totally unlike anything else Shakespeare ever wrote. I wasn't disappointed: it turns out that Timon is a lot more coherent in performance than I would have expected, and more entertaining.

Most of the actors were masked (and pretty much all of the parts were credited just as "Ensemble"), the exceptions being Timon, Flavius, Apemantus, and Alcibiades, our four truth-tellers. Everyone else was interchangeable, which makes sense, because this is not really a play about characters. (I'm wondering now whether it would have a better reputation if it had come down to posterity as a Middleton play, because you don't expect Middleton to be about characters, just about masks and hypocrisy and people doing nasty things to one another and being ironically witty about it.) But there was one moment I found heartbreakingly sad in ways that I did NOT expect; near the end when Timon drives Flavius off, Flavius puts on a mask for the first time.

One of the things that struck me was how many references there were to people "eating" Timon; there's one line where Apemantus actually imagines the guests dipping their food in Timon's blood, a grotesque bit of Last Supper-ish imagery. And it made me think, Timon is kind of trying to be Jesus, walking around and performing miracles for people, and then he turns out to be spectacularly unable to cope with the fact that the full Christ-figure package includes being betrayed, despised, and martyred. (But then, Jesus didn't have to deal with the discovery that ALL of his dinner companions were Judases, except one. Really, it's a pretty neat reversal.)

The whole idea of retreating from the world, of turning your back on society and its hypocrisies and going out in the wilderness to be philosophers, strikes me as one of the big themes that comes up again and again in Shakespeare, from Love's Labour's Lost and As You Like It, down through Lear and Timon, to The Tempest. But this is really the only one where the characters don't come back to society in the end, or at least try to create a new society on their own terms. They don't find growth or self-awareness either, only stasis.

As a side note, I kind of wonder if this might be John Shakespeare's story, right down to the finding-gold-in-random-places bit (in the form of a dutiful son getting unexpectedly rich in a new and disreputable profession). I wonder if Will never finished it because it hit too close to home.
Posted by Fretful Porpentine at 6:55 PM 2 comments: 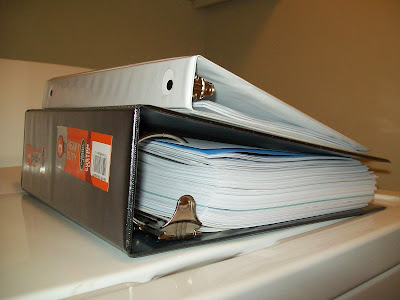 So, yeah. This is it, the moment of truth in every assistant professor's life. The small binder is my actual application for tenure and promotion, the big-ass one is all the supporting documentation. (Mainly: evaluations for every damn course I have ever taught.) I'm surprised it crept up on me so soon. It feels like yesterday that I was applying for this job.

And, you know, I feel surprisingly un-nervous about it all. I've got five years of excellent evaluations from two different chairs, and the general institutional culture at Misnomer U. is that denials are rare and usually for good cause, so I think I'll be OK unless something really wacky happens, like the new provost suddenly deciding to raise the institution's research profile without telling anyone. (OK, I am a tiny bit worried about the new provost.)

But the guy who blew up the microwave oven in the faculty lounge TWICE has tenure. I need to keep reminding myself of that.
Posted by Fretful Porpentine at 7:10 PM 3 comments:

Fulfilling my resolution to post more regularly, even if it's just idle and random thoughts about Shakespeare:

Today is Twelfth Night, and who doesn't love Twelfth Night? It's certainly one of my favorites, at least most of the time. (I always have problems answering the "what is your favorite Shakespeare play?" question, because I change my mind all the time, and I certainly can't pick just one anyway. Shakespeare is awesome because he's varied. But Twelfth Night is delightfully varied in itself, so it is a pretty good pick.)

Anyway, I've just been thinking: I really like Orsino. Students tend not to like him all that much, because yeah, he is silly and self-dramatizing and "in love with being in love" (somebody always uses this exact phrase, every single time I teach this play). And he does say some dumb, sexist things, although it's hard to take him seriously when he turns around and says the opposite thing five minutes later. Opals and changeable taffeta, indeed.

So by the end of Act One, you can see exactly why Olivia doesn't want him, but you also see why Viola does. Because she gets to know him as his servant, and this is a man who is consistently polite and generous to his social inferiors. Valentine assures Viola that he's not "inconstant in his favors" where his servants are concerned; he also accepts Feste's teasing with good grace and insists on paying him properly for his song, even when Feste insists that it's no trouble at all. It's a nice little set of character notes; and it's particularly nice that he starts to get over his posing and eventually wakes up to Viola's love for him because he listens to his servant. He doesn't just treat "Cesario" as a convenient sounding board; he asks questions, pays attention to the answers, and apparently remembers every word of it later ("Boy, thou hast said to me a thousand times / Thou never shouldst love woman like to me.")

(All this characterization, by the way, for someone who isn't even in the play all that much -- he's got a grand total of four scenes and fifty-nine speeches, and disappears for two whole acts in the middle. Orsino is right up there with Shylock, in terms of being a presence without actually being present all that much.)
Posted by Fretful Porpentine at 5:08 PM No comments:

Holy hell, has it been almost three months since my last post? Here's what has been going on in my life:

1) I moved. In the middle of the semester. Into faculty housing, which I've always been sort of ambivalent about, because it feels like acknowledging that I have no life whatsoever in this town outside of Misnomer U. But it is RIDICULOUSLY cheap and only two blocks away from campus, and since it had been five years since the last time I moved, I had forgotten how hellish moving was. And because I am really NOT good at housekeeping and organization and all that, I've been living among the boxes and sort of hoping they will unpack themselves; and because AT&T is EVIL, I still don't have Internet access at the new place. (Which is a good excuse for not blogging during the semester, but I will admit that I decamped to my parents' house for almost the entire break, in part to get away from the boxes, so I haven't had that excuse for some three weeks.)

2) I have been busy with stuff that I don't want to jinx by blogging about, like trying to plan a brand-new summer study abroad trip from scratch, and like going up for tenure. I feel like both of these things could go horribly wrong if I talk about them the wrong way. You'll get to hear about them when they are over.

3) I have been trying to revise the Edited Collection Chapter from Hell in a way that might possibly please the (apparently very grumpy) external reviewer. I am deathly afraid of jinxing this, too, so that's all I'm going to say about it.

4) Conversely, the other chapter for the other edited collection seems to have sailed through the review process, receiving about three lines of blandly positive comment and one request for a very minor revision. This is, I think, the difference between writing about the most canonical work by a majorly canonical writer and writing about an obscure play that no one ever reads or performs. I swear that any scholarship I attempt after this will be confined to the second category.

5) I'm running a Shakespeare film series this spring! (The honorarium for my award-thingy turned out to be just enough to pay for it, so I figured that was a sign that we needed to have one. And yeah, I'm a sucker for doing this out of pocket, but it seemed like a whole lot less trouble than trying to persuade someone else to fund it, and it's not like Shakespeare turns 450 every year.)

So yeah, that's my life. I'm starting to feel a bit like I made vows of chastity and poverty to Misnomer U., in exchange for a job, a succession of long lazy summers, and a sense that I'll be looked after. And you know what? I think I'm OK with that bargain, as long as they don't demand obedience also. (Which they might, unfortunately. Which is another story, and a totally unbloggable one.)

Anyway, I swear I will be better at this blogging thing in the new year. Maybe I'll do another series of Shakespeare posts, because I'm always up for geeking out about Shakespeare, and hey -- 450!
Posted by Fretful Porpentine at 6:03 PM No comments: