The Soldiers: Hey, did you hear about the ghost?
Horatio: I am a university man. I don't believe in ghosts.
Ghost appears.
Horatio: WTF?
Marcellus: Look, cannon!
Horatio: I can tell you all about that. [Horatio explains for forty lines all about Fortinbras, who is obviously going to be a major character in this narrative.]
Ghost reappears
Horatio: WTF?
Marcellus: I hear ghosts don't walk at Advent. Just sayin'.

Claudius: Hi, everyone. I've just married my sister-in-law. I'm sure you'll all agree that under the circumstances, it was a perfectly obvious thing to do. Also, I took care of the Fortinbras problem. So much for him.
The Danish Court: WTF?
All exit. Hamlet is left alone.
Hamlet: I can't believe Mom married that jerk. WTF?
Enter Horatio.
Hamlet: Hey, what are you doing here?
Horatio: I came for the funeral.
Hamlet: You're a little late, but luckily you're just in time for the wedding. Hey, I think I see my Dad.
Horatio: WTF?!?!?
Hamlet: In my mind's eye.
Horatio: Oh. Speaking of your dad, his ghost has been walking the ramparts.
Hamlet: WTF?

Polonius: Ophelia, you need to break up with Hamlet.
Ophelia: OK, Dad.

Ghost: Your uncle murdered me and married your mother. You need to avenge me.
Hamlet: OK. I shall run around and pretend to be crazy!
Horatio, Marcellus, and the Ghost: WTF?

Polonius: Reynaldo, go to Paris and spy on my son. I shall explain how at great length, just so everyone will know what a good spymaster I am.
Ophelia: I'm very frightened. Prince Hamlet is acting weird. I think he's gone crazy.
Polonius: Have you given him any hard words of late?
Ophelia: No, I only broke up with him.
Polonius: Well, WTF did you do that for?

Claudius: I talked Fortinbras into invading Poland instead. This is an excellent plan, because people who invade Poland always stop with Poland. They never go on to invade Denmark later.
Gertrude: Hamlet is acting pretty weird lately.
Polonius: I know why! He's in love with my daughter.
Gertrude: It may be, very like.
Hamlet: Hi there, Mr. Fishmonger!
Polonius: WTF?
Rosencrantz and Guildenstern: Let's explain all about the war of the theaters, since nobody goes to see plays any more if they don't have any stuff about the war of the theaters in them.
Enter Actors
Hamlet: Why don't you recite a speech? Maybe a really long one about Hecuba! On second thought, maybe I will recite a really long speech about Hecuba. On third thought ... you do it.
Actors: WTF?

Polonius: Ophelia, go and spy on Hamlet. Pretend you're reading this book.
Hamlet: Get thee to a nunnery!
Ophelia: WTF?
Hamlet: Did you hear me? To a nunnery! GO!

Hamlet: Sorry about this afternoon, Ophelia. Can I put my head in my lap and talk dirty to you?
Ophelia: OK.
Players perform an extremely suggestive dumb show.
Ophelia: WTF? What was that all about?
Hamlet: Never mind.
First Player is murdered by his nephew.
Claudius: WTF!!!!!

Gertrude: Hamlet, thou hast thy father much offended.
Hamlet: Oh yeah? What about YOU?
Polonius: Help!
Hamlet: Aha! A Rodent Of Unusual Size! A talking one!
Hamlet stabs Polonius through the arras
Gertrude: WTF? That wasn't a R.O.U.S., that was Polonius. You killed him!
Hamlet: Oh, crap. Well, I had a pretty good lecture all thought out, so I'm going to pretend this didn't happen and deliver it to you anyway.
Ghost enters
Gertrude: WTF? Why are you talking to empty air?
Hamlet: By the way, I'm not really crazy.
Gertrude: Yeah, right.
Hamlet: Sorry about Polonius. Now I shall drag him off and dissect him.
Gertrude: WTF?

Claudius: Hamlet, I think you had better go to England. Denmark is getting a little hot to hold you.
Hamlet: 'Bye, Mom!
Claudius: WTF?

Fortinbras: Hi! Remember me? I'm invading Poland, but for some reason I'm doing it in Denmark.

Ophelia: I have gone mad. They say the owl was a baker's daughter.
Claudius and Gertrude: WTF?

Pirates: We are the Plot Device Pirates! Arrr!!!
Hamlet: Pirates! Just what I was looking for! Please abduct me and take me aboard your ship!
Pirates: WTF?

Gertrude: I'm sorry about your sister, Laertes, but she drowned. At least it was very poetical.
Claudius: I'm sure you can see this is all Hamlet's fault. Go and kill him.

Hamlet: Hey, here's a skull! Let me talk to it for a while.
Gravedigger: WTF?
Funeral procession enters
Laertes: I wanted my sister to have a really nice funeral, but the mean priest wouldn't let me. Well, at least I can give her a memorable funeral.
Leaps into the grave.
Hamlet: I loved her more than you did!
Leaps into the grave.
Mourners: WTF?
Hamlet: Oh, and just in case you happened to be thinking of eating a crocodile, I'll do that, too.

Laertes: Let's have a fencing-match, bro. I totally don't hate you any more.
Hamlet: OK. Sorry about what happened at the funeral, man. I guess I got a little carried away.
The foils are poisoned. So is the wine. Everybody dies, except Horatio and Osric.
Fortinbras: Hi, I'm back from invading Poland. WTF? Why is everyone dead?
Horatio: It's a long story.
The English Ambassadors: Rosencrantz and Guildenstern are dead, too. Remember them?
Horatio: Sorry, no one's going to thank you for that.
Fortinbras: I guess I might as well be king, since I'm the only person with royal blood left alive.
Horatio: Sigh. I guess you might as well. Hamlet would have wanted it, anyway.
The entire court: WTF?

Can one desire too much of a good thing? 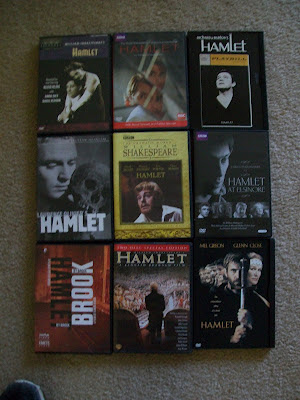 What do you MEAN, I might have gone slightly overboard?
Posted by Fretful Porpentine at 3:59 PM 7 comments: