How I spend my time in boring meetings 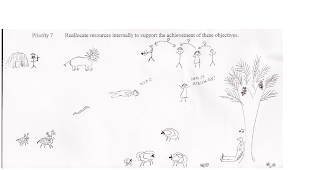 Here at Misnomer U., we have an Early and a Late Shakespeare course. Officially, the dividing line is 1603, although in practice, I tend to push it a year or two earlier (because I am SO not making room for Hamlet in the Early Shakespeare course). I'm not sure I entirely like it -- the second half is tragedytragedytragedy all the time, and there are too many texts to choose from in the first half, but I like it better than dividing by genre, which is what the Beloved Alma Mater did. (Comedies and Histories vs. Tragedies. Because apparently, tragedy is SO much more important that one semester should be devoted to just eleven plays, and as many of the other twenty-seven as will fit should get shoved into the other class, and poetry doesn't count at all.)

But what if we did it alphabetically, and just rotated round and round the alphabet?

Shakespeare I
All's Well that Ends Well
Antony and Cleopatra
As You Like It
The Comedy of Errors
Coriolanus
Cymbeline
Hamlet
Henry IV, Part I
Sonnets 1-31

OK, that sounds kinda good, actually. A nice mix of genres. Kind of a classical theme.

That's maybe a lot of ... Henriosity ... even for me. Still, it could work. You could pass it off as a special topics course on Shakespeare and history. IIRC those are the sonnets where he starts getting all thinky about time and posterity, so they sort of fit.

This sounds awesome! I would love this semester! All the best plays start with M!

Kinda light on comedy, but otherwise a nice representative mix. I don't think anyone would raise an eyebrow at this.

OK, this semester is on CRACK, but I kind of want to teach it anyway. (If you swapped Shrew for Twelfth Night, you would basically have Special Topics: Shakespeare and Misogyny, which would really be a rather interesting course.)

How does your institution divide up the Shakespeare courses? And how do you secretly wish they did?

Posted by Fretful Porpentine at 11:11 AM 5 comments:

First lines of the semester: my version

'Cos it looked like fun when Fie did it:

I'll feeze you, in faith.

I learn in this letter that Don Pedro of Aragon comes this night to Messina.

If music be the food of love, play on.

In sooth, I know not why I am so sad.

So shaken as we are, so wan with care

Open your ears, for which of you will stop

O for a muse of fire, that would ascend

Sir Hugh, persuade me not. I will make a Star Chamber matter of it.

Why I love my university, in pictures 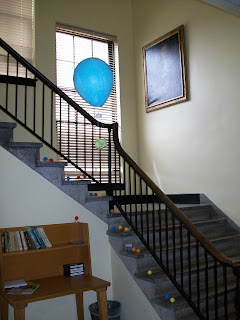 Many spectators gathered on the stairs to watch the balloon. 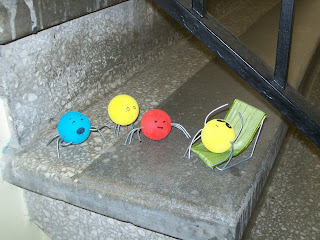 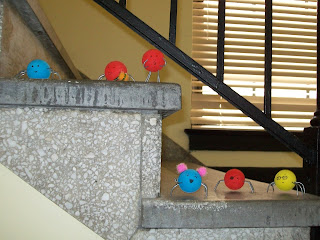 But alas! Not all is well in balloon-land. 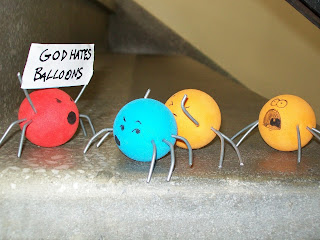 We're hiring for a new colleague this year -- the first one in my department since I came along. The two finalists are coming next week, one right after the other. The first one arrives tomorrow, although he's requested to have a day on his own to explore (which sounds like a fine idea), so I don't get to meet him until Monday. (I wonder if he knows exactly how dead downtown Deep South Town tends to be on a Sunday; although I think one of our two coffee shops is open on Sundays, so at least he won't starve.)

I walked around the campus a little, trying to imagine it through the new-person's eyes. We have some lovely buildings: Victorian, rambling, asymmetrical, towered, balconied. We'll be putting the candidates up in one of them. And April is our best month, I think. My own campus visit was in April, though at the other end of the month: magnolia-time rather than azalea-time. I remember the ivory cups spilling their fragrance on the air. I remember deciding (a good decision) to ditch the interview suit and wear a nice summer dress. I remember noticing all the little details that spoke of bare-bones budgeting -- one and only one search committee member at each meal, an ancient TV cart instead of a smart classroom for the teaching demo, a suite in the Honors dorm instead of a hotel room -- and deciding I didn't care. (This may not have been the best decision, as Misnomer U. spent my first couple of years lurching from one crisis to another.)

Posted by Fretful Porpentine at 7:17 PM No comments: