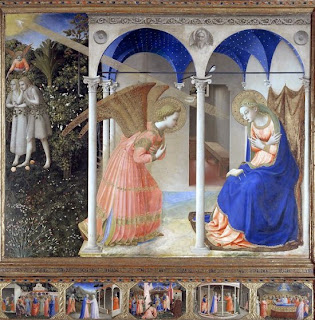 Classes start tomorrow, which means I have this feeling in my stomach like I'm hovering on the platform trying to work up the courage to board a roller coaster. (N.B. I have not been on a roller coaster since I was nineteen and a couple of my friends talked me into going to Busch Gardens. This is a matter of choice.)

At least I have syllabi and reading lists now. The one for the medieval lit / women's studies class was a bear to draw up, as the parameters for the course were, basically, "read a bunch of stuff written in the Middle Ages that has to do with women." You know, as much as I like to grump about the rigidity of the traditional, chronologically-organized survey course, that sort of structure does make a lot of decisions easier. Trying to come up with a coherent structure and narrative for this course was like disentangling a clump of thread that has been soaked in honey so all of the different strands keep sticking to each other. (This was, incidentally, also how I felt about my dissertation.)

I ended up with a roughly tripartite structure: a month or so on Women and the Church, another month and a half or so of secular love lyric and romance, and a third unit with the gloriously vague title "Debating Marriage / Debating Women," in which we shall be reading lots of Chaucer and Christine de Pizan and, I hope, bringing some of the strands together -- because I do want them to come together eventually, just in a way that makes a pattern instead of a big sticky tangle. It will be like a tryptich, ideally, where you start to see the connections between the panels. (Art metaphors are coming naturally to me at the moment, as I have spent much of the afternoon searching for images of Eve and Mary to show on the first day, hence the pretty pictures at the top of this post*.) Or it might end up being a confused mess. There is only one way to find out. I feel a bit like Eve in the first image, reaching out her hand to take the apple.

Much will depend on the students, because so much does depend on students in small seminar-type classes. There are eight enrolled at the moment; I know three of them from the Shakespeare class last semester, and they're all pretty sharp and will be able to handle whatever I throw at them. The other five are complete unknowns. They are nearly all English majors -- I'd been hoping for a history or art student to mix things up a bit, but students here rarely seem to take upper-level classes outside of their major.

I hope they like me. I hope they don't mutiny at the sheer volume of Middle English they're going to be reading. I hope I can actually get some sleep between now and Tuesday. I hope...

I get that stomach feeling at the beginning of a term, too. Glad to know I'm not alone, but sending empathetic wishes for good feelings your way.

Oh, this sounds like a great course! Are you reading Marie de France?

I hope you'll tell us more about your readings as you go. And are you going to show them some art, too?

outside voice -- Thanks! And welcome.

Bardiac -- Yes, we'll be reading six of the lais, and there will definitely be art.

I'm still deciding how much detail I want to include in posts about the reading lists, since an awful lot of people seem to reach this blog using search terms like "term paper lady windermere's fan," and I'd just as soon those people weren't my students. But we'll see.

This course sounds fantastic -- your categories make a great deal of sense, and basically no matter what you read, the three will speak to each other very well. It sounds like great fun, and I look forward to hearing of your (and your students') progress.

You could always use names ala Jo(e) for the lit. M from the country on the other side of the channel!